When you become a monthly sustainer, Volunteers of America Southeast Louisiana will welcome you into the Maud Squad because like our co-founder, Maud Booth, you know that caring plus commitment changes lives.

Maud Ballington Booth (née Charlesworth) was the co-founder of Volunteers of America and an:

From the agency’s founding in 1896 to her death in 1948, she was revered by many as one of the best lecturers of her time and was among the most sought-after speakers of the Chautauqua education and social movement. A lecture attendee once said, “she has fire and magnetism—gifts of the highest oratorical order, sustained and animated, by deep conviction, high purpose, and burning earnestness.”

While on public speaking tours crisscrossing the nation, she would collect her payments for the events and use the money to further sustain her work in the prisons and her prison reform programs, specifically the two Hope Houses she started for parolees and former prisoners.

As we celebrate the 125th year of Volunteers of America in 2021, it is Maud we believe represents the ultimate sustainer of the work.

A network of sustainability

At Volunteers of America Southeast Louisiana, we are committed to continuing Maud’s work—to serving the most vulnerable members of our community. And, to do so we need a network of steadfast supporters surrounding us. Monthly sustainers make a regular, compounded impact to Volunteers of America that directly contributes to our longevity and impact. Your demonstrated commitment to our agency is life-changing, especially for our consumers. It is also beneficial for you to become a monthly sustainer because you will: 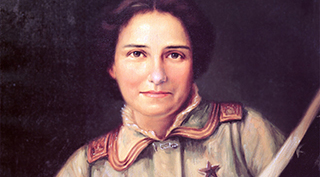 Maud Ballington Booth was a Suffragette, feminist, activist, philanthropist, author, lecturer, and advocate for prisoner’s rights in America from 1896 to her death in 1948.

Celebrating the Women of Volunteers of America

Maud’s work continues today through our agency’s women that carry it on -- with her same fire and earnestness. It is through the lens of Maud’s life that we will celebrate these women and share their stories.

Sign Up as a monthly sustainer to join the Maud Squad! Starting at just $10 per month you make changes lives and, as a Maud Squad member, you will get a special quarterly e-newsletter highlighting our women leaders, women consumers, and women-centered programs in addition to our regular VISIONS and Spirit newsletters.

Questions? To learn more about becoming a monthly sustainer and joining the Maud Squad contact Lydia Wilson at lwilson@voasela.org