New Orleans, LA (March 22, 2016) -- On March 15, Volunteers of America Greater New Orleans hosted its 24th Annual GolfStar Classic, presented by Jay Trusheim, Prudential Financial Professional, offering P&C through Liberty Mutual Insurance, at TPC Louisiana. The tournament is the sole fundraiser for the organization's Adoption Program. As a licensed adoption agency for over 70 years, Volunteers of America is a respected pioneer in issues such as open adoption. The Adoption Program works with both women facing unplanned pregnancies and with married couples struggling with fertility, and has united thousands of forever families over the decades.

More than 130 golfers participated in the tournament, and many families with children adopted through Volunteers of America also took part in the festivities. The event featured food by Acme Oyster House, Texas Roadhouse, Fat Harry's, Maurice French Pastries, Pepsi Beverage Company, Starbucks and Southern Eagle; a fabulous silent auction; and an opportunity to win a 2016 Mercedes CLA250. 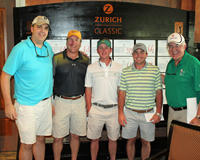