A Structure for Success 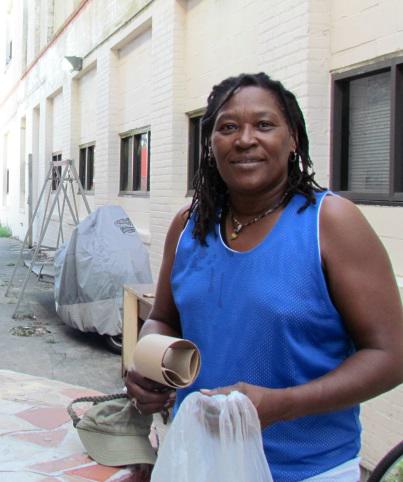 Emelda works Monday through Friday at the Single Room Occupancy facility of Volunteers of America. She maintains the facilities—making sure that everything from the kitchen to bathrooms, and common areas are clean and orderly. Emelda also lives at the facility; she became a resident in April of this year and the transition was, “the best thing" that could have happened to her, she said.

Emelda had been attending meetings at the facility for people in recovery from substance abuse for some time and has been clean for many years.But when she left an abusive relationship earlier this year and became homeless, she turned to the facility for help.

Within one week of living at the facility she became employed with Volunteers of America as the janitorial staff—a one woman show. Emelda was chosen for the job because of her prior experience as a housekeeper at multiple organizations throughout the city. Emelda loves the structure that this job provides for her and she believes that the structure and skills training that the Volunteers of America staff invests in its residents are the cornerstones of their success. “This is a good place to excel," she said, citing the counseling that she receives and the atmosphere of the facility as major contributing factors to her stability and peace of mind.

“Before I moved in I was mentally hurt, things were very difficult, but we're a close knit family here." Emelda feels an especially strong bond with one case manager in particular, Ms. Camilla; and Camilla is appreciative of Emelda.

Emelda is often looked at as a liaison by other residents, and she too is turned to for guidance. The guidance she provides may be a supportive word, a helpful gesture, or in some cases a delicious meal. Recently, Emelda purchased ten pounds of shrimp to boil for the whole facility. With the structure and support of the Volunteers of America Single Room Occupancy facility, Emelda is exceling and developing in ways that are not only beneficial to her as an individual, but also to her community.