Bonds of Friendship Endure Over Time 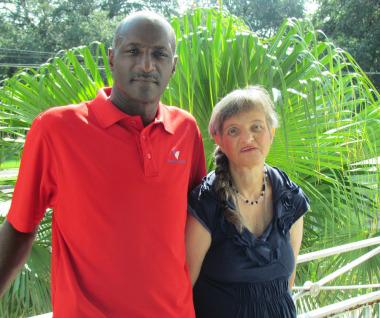 Carl and Stella may seem like an unlikely pair, but these two forged a devoted, lasting friendship. Stella, a person with an intellectual disability, grew up in foster care and had no family nearby. Carl is a facilitator in our Supported Living Services program which helps people like Stella with daily tasks so they can live independently—assisting with goal setting, money and medication management, transportation and socialization.

The program serves more than 100 children and adults with intellectual and developmental disabilities, cerebral palsy and epilepsy, as well as some elderly. Sometimes, the program staff and the people they serve form a strong family-like bond. This is what happened with Stella and Carl. The two met in 1989 when Stella was served by of our Supported Living Services program and Carl became her Direct Support Professional. Carl found that Stella had a kind spirit, and he enjoyed helping her keep doctor's appointments and run errands. But three months later, Stella became ineligible for the program when the government deemed her capable of living on her own.

But that was not the end of Stella and Carl's friendship. Carl happened to live in the same apartment complex as Stella and noticed she was struggling. He often lent a hand, helping decipher a utility bill or ensuring she crossed the street safely on her way to the grocery. Stella often knocked on Carl's door with a question, and Carl always patiently and selflessly responded. This continued for years—14 to be exact. What Carl didn't realize was that Stella's living conditions were deteriorating.

He discovered she was having trouble caring for her living space and pets when she was on the verge of eviction. Carl went to work to help Stella re-enter the Supported Living Services program. In the meantime, to keep her in her apartment, Carl helped clean, paint and shampoo the carpet.

Stella rejoined our Supported Living Services program and received the help she needed. At 64, she was employed, enjoyed going for walks and was passionate about animals. Carl and Stella maintained their close friendship until she passed away in 2017.

Stella was almost like family to him and his wife. Carl says, “You have moments where you feel an attachment to people, and they to you. The bottom line for me is that this is what God wants me to do—to serve others—and it’s been a blessing.”