A Father’s Perspective on Adoption 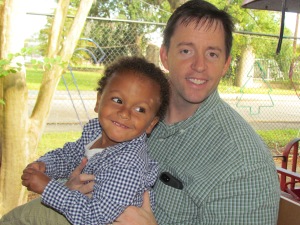 "The moment we put him in our arms, there was a bond," says adoptive father Donald about his son, Gianni. Donald and his wife, Vanessa, brought Gianni home from the hospital almost four years ago, in September of 2011. And now, every year he gets to celebrate Father's Day, "like any other father—it is just a wonderful feeling to be a parent." Adoptive families are unique, but their desires for their children are universal—that they be happy and healthy.

To help create their special and loving family, Donald and Vanessa turned to Volunteers of America. Vanessa's father had volunteered with the residential re-entry program for many years and they trusted the organization to guide them in the adoption process. Donald says he feels blessed to have been selected by Gianni's birthmother to care for her natural born son, and to have maintained some openness in their adoption plan. Their family meets with Gianni's birthmother and her daughter, Gianni's biological sister, several times a year. Maintaining bonds with Gianni's birthmother will be very important for Gianni as he gets older and starts to have questions about his adoption story. But for now, Gianni is just enjoying getting to play with his sister.

Donald and Vanessa are excited to share their adoption experience with friends, as well as other families at church and at school. "We feel like we are now stewards or ambassadors for adoption," says Donald. Many people have asked for advice, some of which already have natural born children. "People have many reasons to adopt; some cannot conceive themselves, but others just want to expand their families and they feel called to adoption." The couple has also spoken at a Volunteers of America adoption meeting for potential adoptive parents as well as volunteered at our annual Golf Star Classic, the sole fundraiser for the adoption program. These efforts are made with the intention of helping others to also realize their dream of becoming parents.

It is clear when you speak to Donald, why he feels so compelled to advocate for adoption—Gianni. "He is a loving, kind, compassionate kid, who can do so much. The thought and emotion that he puts behind the things that he says are inspiring." For instance, when you ask him how his day was, he might just say, "Amazing!!" Donald is enjoying watching Gianni grow --he knows how to stick up for himself, as Donald found out looking on at a recent birthday party. "That's what you want, to know that they'll be ok." But mostly, Gianni is a fun-loving and active child, exited to play any sport, especially football, T-ball, and basketball.

Donald and Vanessa are raising Gianni with care and appreciation for their son, his birth mother and Volunteers of America. This Father's Day, with the love and support that he and Vanessa give Gianni, Donald is sure to get what he wants—a happy and healthy child.