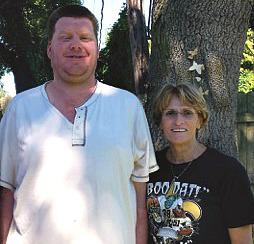 Meet Ashton, known as Joey, adopted as an infant through Volunteers of America. His adoptive father, Ashton Sr., a federal probation officer, volunteered at our Residential Re-entry Center where he learned about our Adoption program.

Ashton and his wife Ann struggled for years to become parents. They joined the Adoption program and a short time later adopted Joey. At the age of nine, Joey was diagnosed with autism. When he became eligible for state services for people with developmental disabilities, his parents selected Volunteers of America as his service provider. They felt comfortable working with the same agency that helped bring Joey into their family. Today, at age 31, Joey still receives services through our Supported Living Services program.

Like many adopted persons, Joey became curious about his birth parents and asked his mother to contact the Adoption program for more information. The Adoption Program Manager was able to contact Joey's birth mother, who agreed to meet him and his adoptive mother. Joey learned that his birth mother married and had three other children. Joey looks forward to building a relationship with her and meeting his half-siblings.

Joey's story, like many others, shows how Volunteers of America touches lives in so many ways. We are the charity that always steps forward to help the most vulnerable.