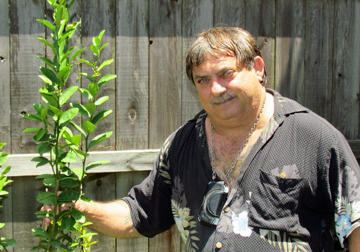 Rickey, an Army veteran who served in West Germany during the 1980s, is no stranger to challenges. Following his military service, he tried a number of vocational pursuits—carpenter, welder, even deckhand—finally settling into driving a taxicab in 2003. About a year ago, a hunting accident severely injured Rickey’s foot.

Suddenly, he was unable to drive and had no livelihood. Financial and emotional hardships followed. Without nearby relatives or close friends to support him, Rickey found himself homeless. Fortunately, the VA hospital referred Rickey to Volunteers of America’s Veterans Transitional Housing program facility on Napoleon Avenue, where he could live and receive help to rebuild his life.

Case Manager Jamon Barrow reports that, at first, Rickey was withdrawn and uneasy. Over time, Rickey came out of his shell and decided to put his interests and skills to good use. He took it upon himself to oversee the facility’s landscaping.

Maintaining flower beds, tending to vegetables and beautifying the yard has become Rickey’s passion—one that makes the living environment more positive and appealing for all veterans in the residence. “Rickey has become active within the last two to three months,” says Barrow. “He takes pride in his work and always volunteers. We have seen a marked difference in his overall attitude, and he is very upbeat. When new residents come in, he takes the lead to ensure that the rooms are prepped and they have everything that they need.”

Ricky is hopeful about the future. With his foot mostly healed, he has returned to driving his cab. As he approaches the end of his time in the program, he ponders his goals. He hopes to move back to the West Bank, continue driving and pursue his artistic passions of writing short stories and poetry— which he hopes to publish someday. At Volunteers of America, we’re proud to be able to give veterans like Rickey the tools they need to rebuild their lives.